Three new parts of the database The Human Protein Atlas

The HPA project has recently released a new version of The Human Protein Atlas. This is the most extensive update so far, with the completely new parts Blood Atlas, Brain Atlas, and a Metabolic Atlas, developed in collaboration with Chalmers University.

The Human Protein Atlas project aims to characterize all proteins in human cells, tissues and organs. All data is publicly available for scientists both in academia and industry and it has already contributed to several thousands of publications in the field of human biology and disease. The new atlas is the nineteenth version to be published.

“The Human Protein Atlas consists of six separate parts out of which the atlases for blood, brain and metabolism have now been launched. We believe that all the new data that now become available will be very valuable for further research in these areas,” says Fredrik Pontén, clinically responsible for the HPA project at IGP.

The Blood Atlas will be particularly interesting for immune-based research and efforts to develop new, effective treatments in oncology and autoimmune diseases. Genes with elevated expression in different types of white blood cells have been identified, including many genes previously not described as enriched in human blood cells.

The Brain Atlas describes proteins in different regions of the brain, not only in humans but also in pig and mouse. Differences found between the three species might become important when results from animal models are translated to research on the human brain.

The new Metabolic Atlas is the most extensive mapping of human metabolism to date, with biochemical information and connectivity for more than 13,000 reactions, 4,000 unique compounds, and 3,500 genes.

Together with the journal Science, a poster describing the Blood Atlas has been produced. This is published in this weak’s issue of the journal and in a month a Brain Atlas poster will be published. 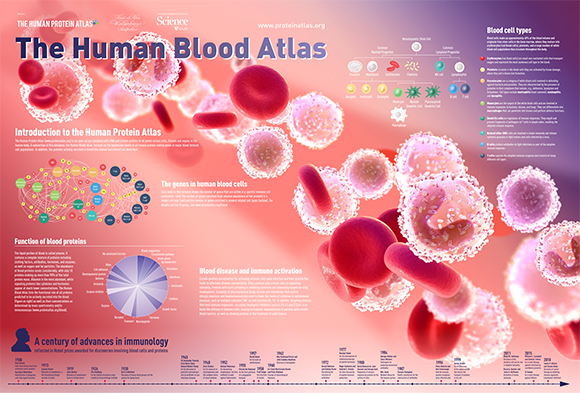